What’s The Best Time Of Day To Send A Marketing Email?

There’s no doubt that email marketing can be tricky at times.  Figuring out what the best time of day to send a marketing email to your list is one of the pieces to the puzzle that needs to be solved.

The good news is that I’ve researched and pulled together the data from various email marketing companies in this one post.

Here’s all the resources of data compiled:

Let’s dive in now and take a look at when to send your marketing emails.
Table Of Contents hide
1 What Is The Best Day To Send Emails?
2 What Is The Best Time Of Day To Send A Marketing Email Campaign?
3 What Are The Worst Days For Email Marketing?
4 When Should You Email Your Own Email List?
5 Frequently Asked Questions
5.1 What is the best day for sending email marketing?
5.2 What are the best email marketing providers for small business?
5.3 What are the best rated email marketing services?
5.4 What's the best email autoresponder?
5.5 What is email open rate?
5.6 What is email click-through rate (CTR)?
5.7 What is email bounce rate?
5.8 Should you send marketing emails on the weekend?
5.9 Is it okay to send emails at night?
6 Suggested Posts For You…

What Is The Best Day To Send Emails?

Spoiler Alert: The best day to send varies and can only be found by testing with your own email list.

But let’s take a look at the data out there to see of we can get a good idea of what might be the best day to send out an email marketing campaign.

First up, a 2013 study by GetResponse reveals the best day to send emails based upon the CTR or click-through rate.

Here’s the infographic that came about after pulling all the data together. 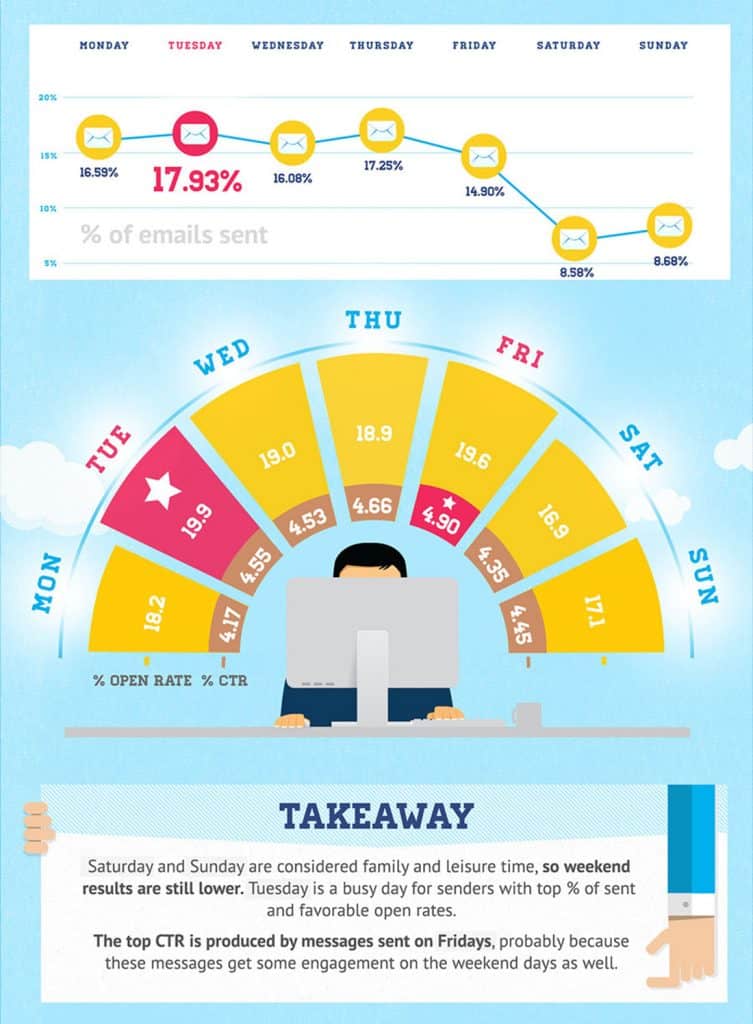 When evaluating the best day upon CTR, you can see from GetResponse’s data above that the best day to send marketing emails is Tuesday with an average of 19.9% open rate and 4.55% CTR.

The weekend email marketing results can be seen as significantly lower than weekdays in terms of open rate percentage and click-through rate percentage.

In a more recent study done by Campaign Monitor in 2020, key findings were put together to define global email marketing benchmarks. 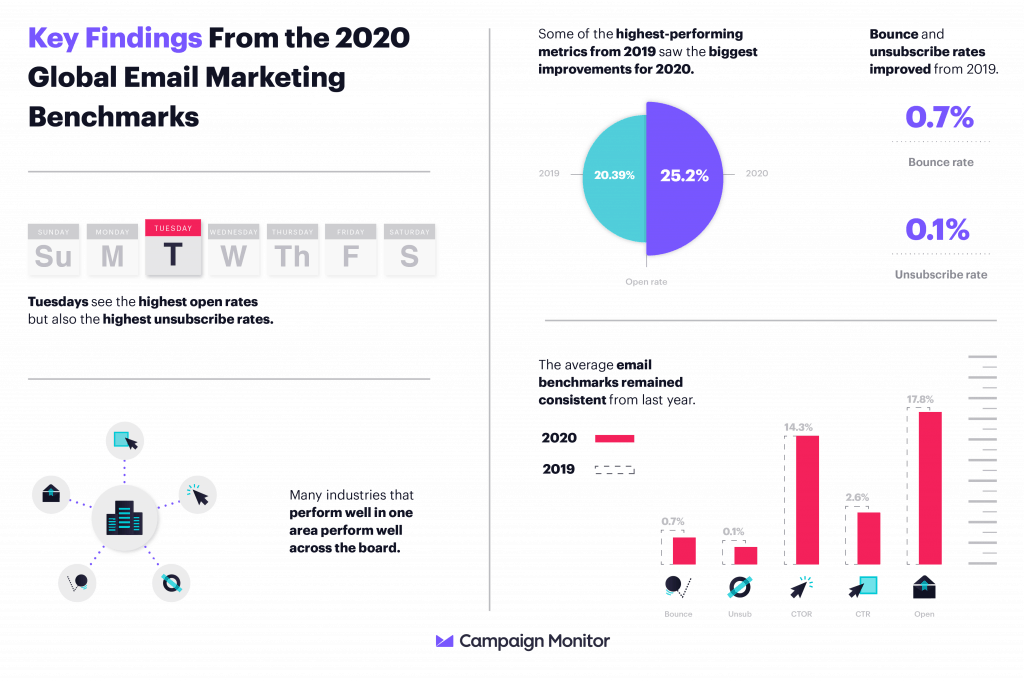 Interestingly enough, Campaign Monitor came up with the key finding that Tuesdays see the highest open rates of all the days of the week.

At the same time, Tuesdays also resulted in the highest unsubscribe rates of any day.

What Is The Best Time Of Day To Send A Marketing Email Campaign?

The specific time of day to send a marketing email is inherently a little more tricky since you’ve got a few more variable to work with than just days of the week.

However, let’s dive into the hard data and hopefully gain some unique insights into when to send your next email to your list.

Here’s the results of a study done by Intercom: 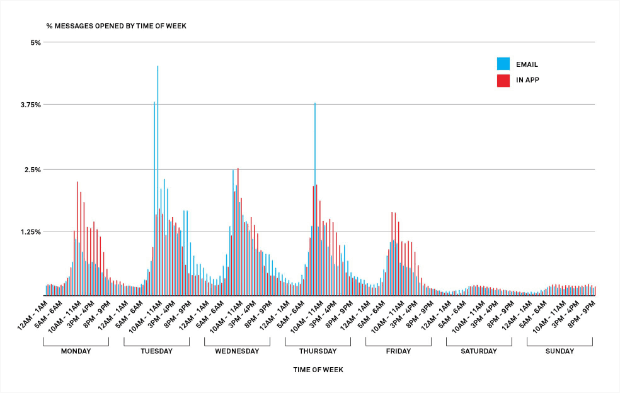 The graph above shows distinctly that Tuesday at approximately 10am is the best time of day to send email marketing campaigns.

One thing that I also find interesting about this graph is that the timeframe in the morning between 10am to 11am consistently received the largest percentage of email messages opened every single day.

Another thing to note is that Thursday at around 10am came in a close second.

In a similar study done by GetResponse, the percentage of messages along with the open rate, click-through rate, and click-to-open rate were collected.

One thing that’s not talked about often is email lifespan even though it in some ways is inherently linked to the time of day you send a message out. 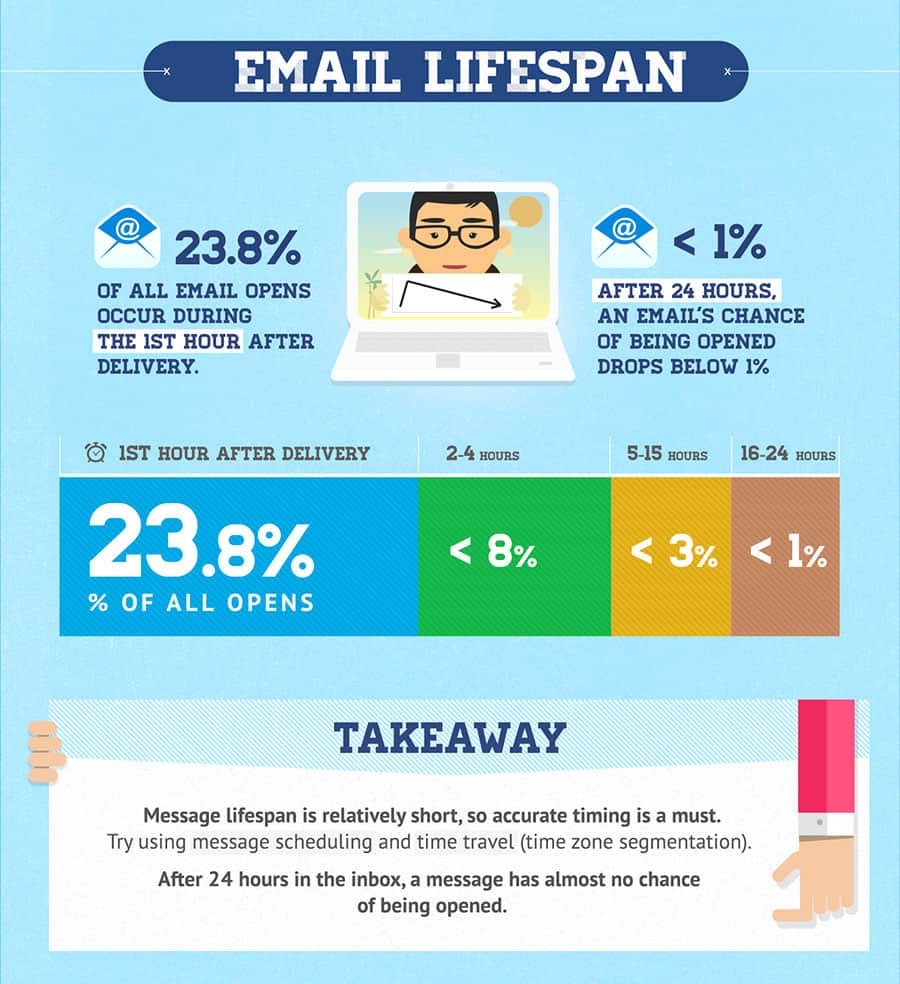 GetResponse compiled their data once again and found that 23.8% of all opens occur within the first hour of delivery.

This means that if you don’t get the exact time of day right to send out your emails, then you could lose out on sales and obtaining customers.

According to Hubspot, the highest number of email opens occurs at 11am with 30,000 total emails opened.

Once again, we see that the morning hours are where the largest number of emails are being opened.

The final study to take a look at is one that was done by Omnisend.

The data shows that the highest average open rates occur at 8am, 1pm, and 4pm.

Additionally, the highest average click-through rate occurs at 8am, 1pm, 4pm, and 5pm.

What Are The Worst Days For Email Marketing?

One interesting data set to look at that was compiled by Campaign Monitor is the worst days for email marketing.

The data revealed that…

The best question you can ask is when you should email your own email list.

Based upon the data, on average the best time of day to send out marketing emails to your list:

If we’re being honest, the best time time to send emails to your own list could vary greatly from this consensus.

There’s a reason why you always hear to split-test your headlines and always test things with your email list.

It’s because the number of variables make it certain that there’s no general time that can be thrown out to send emails and have it work for everyone’s individual email list.

It’s important to test sending out campaigns at different times and look at your reports.

Remember, the best data set is your own email list.

What is the best day for sending email marketing?

The best day for sending email marketing is generally considered to be Tuesday.

What are the best email marketing providers for small business?

The best email marketing providers in my opinion would be either AWeber or ActiveCampaign.  You should choose AWeber if you want your small business to focus on affiliate marketing.  On the other hand, if you want a great all-around email autoresponder then definitely go with ActiveCampaign.

What are the best rated email marketing services?

The best rated email marketing services that are well-known would be GetResponse, AWeber, and ActiveCampaign.

The best email autoresponder in my opinion would be ActiveCampaign.  They have next-level automation capabilities and incredible email deliverability.

What is email open rate?

Email open rate is the percentage of email subscribers that open an email versus the total number of subscribers.

What is email click-through rate (CTR)?

Email click-through rate or CTR is simply how many email subscribers click a link or image in an email.

What is email bounce rate?

Email bounce rate is how many emails are never sent to the specified email address.  Consequently, those emails will never be opened or any have any action taken.

Should you send marketing emails on the weekend?

It is recommended to not send marketing emails on the weekend.  Instead, the best time of day to do email marketing would be either Tuesday or Thursday around 10am.

Is it okay to send emails at night?

It’s not okay to send emails at night, since the lifespan of an email tapers of dramatically every hour.  If all you do is send emails when everyone is asleep, then you’ll more than likely have terrible open rates.

Suggested Posts For You…

I hope you enjoyed this post. This post may contain affiliate links, meaning I get a commission if you decide to purchase through my links at no additional cost to you. 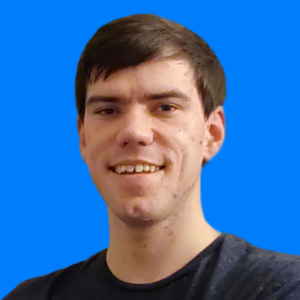 DropFunnels vs Kartra 2022: Which One’s Better?

DropFunnels vs GrooveFunnels 2022: Which One’s Better?

Switch To ActiveCampaign: 10 Reasons Why You Should

How To Get Bonuses For Affiliate Offers [GET ALL MY BONUSES] 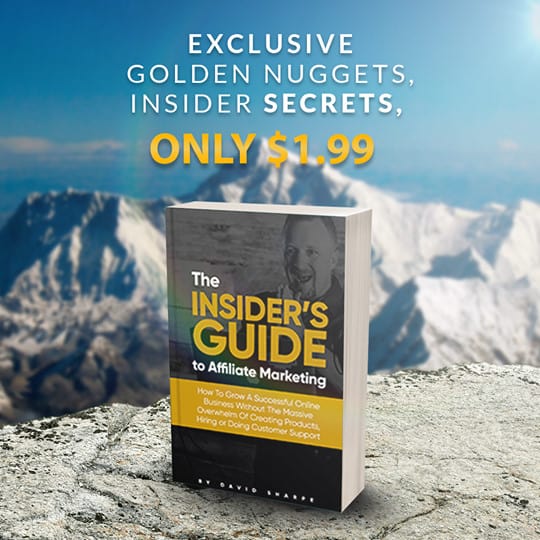 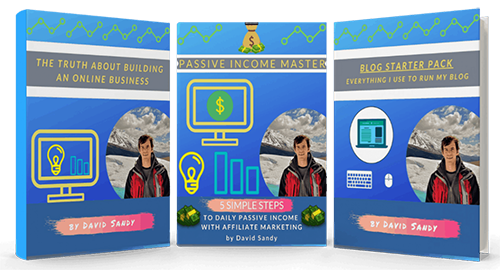 Yes, I Want The Ebooks.

Please log in again. The login page will open in a new tab. After logging in you can close it and return to this page. Learn How To Grow A Successful Affiliate Marketing Business Online